(I dedicated this post to my true and loving friend, Didi.)


This is a Love Story! It’s a story of a friendship, a very long, loving friendship.

I first met Didi when she was three and I was four years old. It was a hot summer afternoon, when I first saw her walking down my street (yes, to her mother’s hoarer, she was three and walking down my street!). I invited her to run through my sprinkler. Our parents got to know each other very well after that day. We even started in the same kindergarten class together. We were inseparable. Everyday we would walk to school together. I went on camping trips with her family and she would spend the night with me. Marilyn (Didi’s mom), even made us matching dresses. We hardly ever took them off. 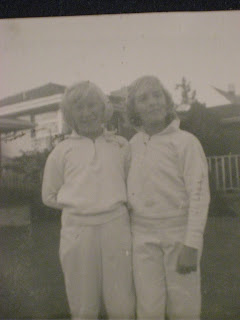 Then in fourth grade she moved away. I can still feel the pain. It was like a part of me was gone. We kept in touch through the phone. We even device a plan, that during the summers, we would stay at each others homes for as long as we could. Ever summer, I was at her home or she was at mine, for weeks at a time. I even got to go on some vacations with Didi.

As we entered High School, we didn’t see each other as much. But we looked out for each other. College came and we still shared a strong bond.
When we were young, we’d dream big dreams. We talked about and shared everything. Didi was my maid of honor, for my wedding and I was in her wedding. 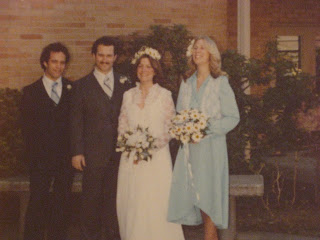 We planned our lives, never thinking we would be without each other. We took a trip to Hawaii before we were married. . 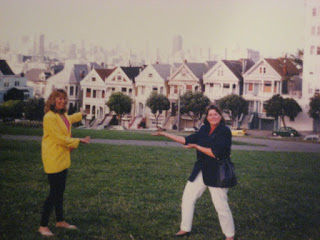 Then we took a trip to San Francisco, after we were married 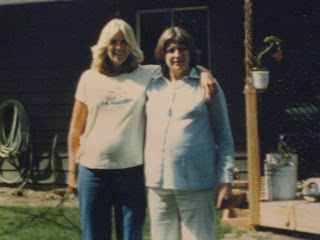 Didi and I even became first time moms together.

But the best times were at Cannon Beach, where we became Christians. Every year we would drive down to Oregon and go to a Woman’s Retreat together. I couldn’t wait to have the long weekend with just her, no kids or husbands. We would laugh, talk, cry, and eat together. We would stay up late and get up early. We packed as much time in together as we could. Plus, we were being feed the word of God.


Today,we don't live near each other, in fact, not even in the same state. But through this blog, phone calls, and sometimes an occasional visits, we are still very close.


There is so much, much, much, more, to our friendship. The stories could go on and on.
That happens when you have known someone as long as we have, 55 years!

These are pictures we took when we would get together each summer. 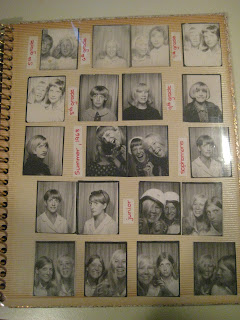 Do you remember those photo booths? 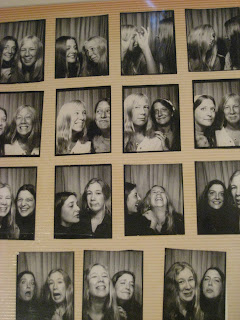 So, Happy Birthday Didi. You know how much I Love You. 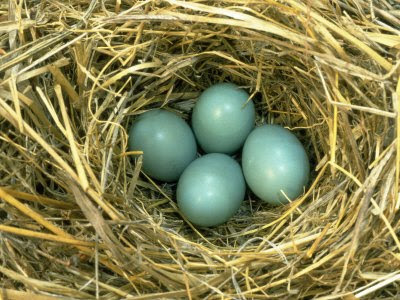 "Patience is waiting. Not passively waiting. That is laziness. But to keep going when the going is hard and slow - that is patience".
~~~~~~Y~~~~~~
~Tidbits~
When washing new towels, always add a cup of salt to the water. The salt will set the color so the towels won't fade as quickly.
Posted by Christine at 6:48 PM 2 comments: 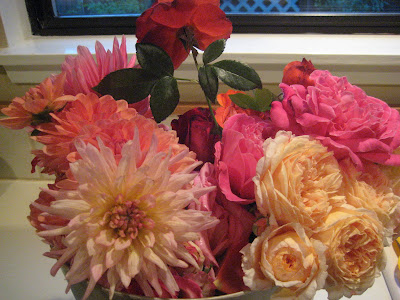 Flowers from my garden

Ahhh... it's over and was a huge success.

The flowers were a show stopper.
The pitchers were a hit.
My speaking went off with out a hitch.
( My jokes were Corny but I got laughs)
Yes, success feels good. 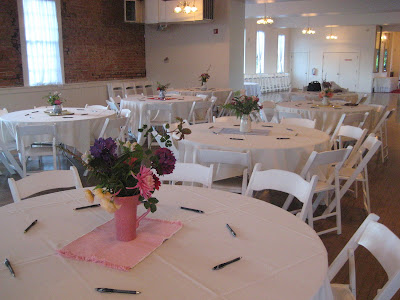 The room set up and ready for the Retreat 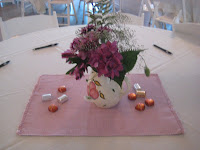 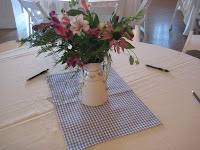 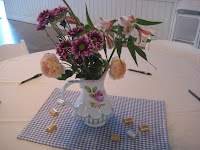 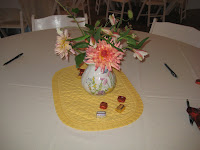 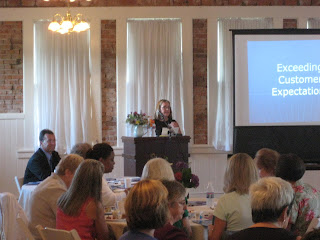 ~Tidbit~
When the first hard frost is forecast, pick those green tomatoes, bring them in and wrap each one in a page of newspaper. Store in a suitable dark container with lid, at room temperature and check each one every four days. They will all eventually ripen with the texture an taste of a vine ripe and fresh picked tomato. 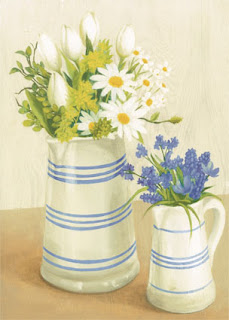 This year’s Fall Retreat, for all the secretaries in our school district, will be this week. I am on the committee that puts on this yearly event and they have selected me to be the Master of Ceremonies. I have written and practiced my opening and closing remarks, plus a few jokes. That part is ready!

I am also in charge of decorations. Each of the 15 tables has a center piece that is part of the door prizes. Coming up with the ideas for these decorations was very easy for me because I got a lot of ideas from my Blogger Friends.

This year the decorations will be various types of pitchers with cuts flowers from my garden. Our budget is very limited, so I shopped Goodwill and other thrift stores for the past eight months. I bought 15 pitchers, each costing under $2.00. And with the flowers from my garden, it should be very inexpensive this year. Putting all these bouquets together will be a last minutes job. Last year, I used a variety of teapots with my flowers and it was such a huge success (I shopped thrift stores for the teapots). I’m hoping the pitchers this year, will be as sucessful. Some where on the table is a “mark” that tells who gets to take home each center piece. 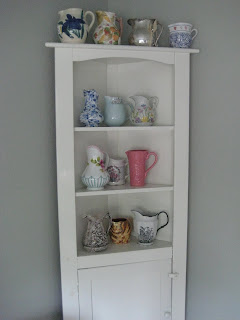 I bought a few more pitchers since this picture


As the days go by, preparing and anticipating for this Retreat, I still am waiting for our next grand baby! If I get THE call from my daughter, the committee will have to go to “Plan B".

When serving perishable foods at outdoor parties, use a inflatable kiddies pool. Fill it full of ice. Place the bowels of potato salad, chicken salad, or even drinks, in the ice. You can place flowers around the ice or add a center piece for display. Remember to pre-chill the items before serving and try not to let foods stay out for more then an hour. You can make smaller servings and replenish them each hour for longer parties. 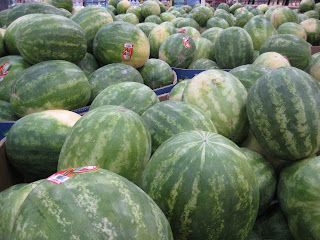 Watermelons at Costco
" The smallest seed of Faith is better than the largest fruit of Happiness."
~Henry David Thoreau~

This cleanup trick works while you sleep! Lay a barbecue grill rack on the lawn overnight- the dew will combine with the enzymes in the grass to loosen any burned-on-grease. Try it with messy oven racks too! 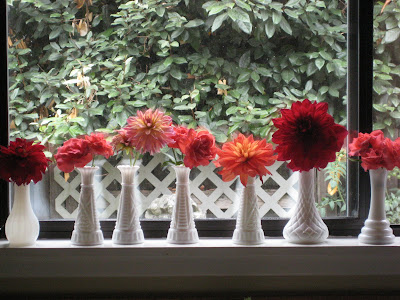 Roses and Dahlias on the windowsill,
in milk white vases 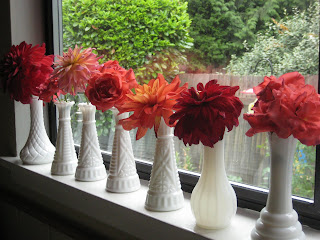 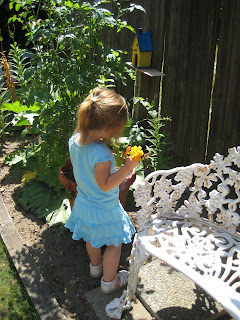 Running back to show Mommy! 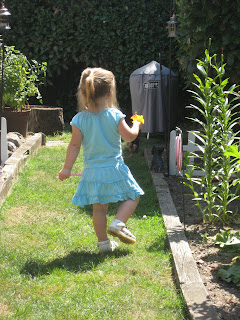 ~~~~~~Y~~~~~~
~Tidbit~
A rubber garbage-can cover will hold small plants, gardening tools, and other necessities so that you can carry them around the garden and avoid back-and-forth trips.
Posted by Christine at 3:52 PM 5 comments: 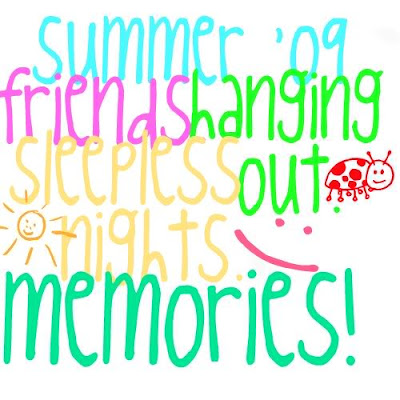 I've been "Tagged" By
Mocha Mom at http://life-be-in-it.blogspot.com/
My Five favorite things about Summer:
1. Sleeping for as long or as little as I want.
2. Lot of sunshine, which means Flowers!
3. Playtime at the beach or in our backyard.
4. Vegetables and Fruit galore.
5. Family, Family, Family, Family!!!
Now I need to Tag others, so here it goes:
1.Betsy at http://myfivemen.blogspot.com/
2. Jill at http://kinneychinaadventure.blogspot.com/
3.Darcylee at http://in-this-season.blogspot.com/
4.Valerie at http://wwwglimpseofmyworld.blogspot.com/
~~~~~~~~~~~~~~~~~
I have been busy (no baby yet).
I am back to work, which is nice. I really enjoy the people I work with and I love my job.
It's just that there aren't any students, yet. So it's hard to keep motivated.
I'm taking a few classes (trying to keep up with technology) and going to a lot of meetings.
The students will join us Sept. 2nd. Until then, it's very quiet.
I'm also getting things ready for the big Retreat that is coming up. I will post about that later.
Thanks for all your comments!
~~~~~~Y~~~~~~
~Tidbits~
A great way to repair those nicks on your kitchen cabinets is to go over the nicks with a marker that matches the finish of the cabinets, You can polish over them with clear fingernail polish.
Posted by Christine at 2:22 PM 1 comment:

No RAIN yet, but I've got my Umbrella! 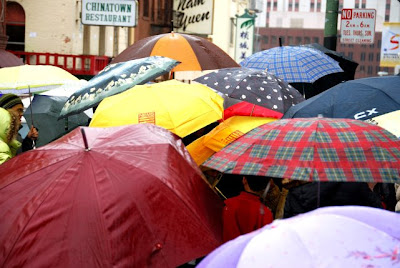 This past weekend we all started preparing for the birth of our 2nd grandchild. Our daughter will be have a Home Birth. There are so many things that you need, to prepare for this type of birth. My job is the food/snacks, drinks, towels (10 of them), Olive Oil, and umbrella.
OK, so you want to know why the umbrella? It's to distinguish which home the Mid-wife will be going to. Pretty clever!

I have been reviewing everything from my Doula class, I took 2 1/2 years ago. I got out all my notes and text books. It is getting very exciting. We have started keeping track of her contractions. When the contractions start, and how far apart. What we are looking for is 4-1-1;
4 minutes apart, at least one minute in length, for 1 hour or more. That's why it is called the
4-1-1 rule. When we have hit that mark, it's time to call the Mid-wife and put up the umbrella!

My bags are packed with all my information and "tools". Now I'm ready to go!
Oh, by the way, we don't know if it is a boy or girl. I'm betting on a boy. Don't know why, but it feels like a boy to me. (Don't tell anyone, but I've been buying the cutest little boy things) If it is a girl, I will rejoice. I think having a sister would be so wonderful. Both my daughter and I don't have a sister, so this would be unique and fun.
It's a win, win situation!

~~~~~~Y~~~~~~
~Tidbit~
When the shower mat begins to look grungy, it's time to soak it in a tubful of warm water and distilled white vinegar. Then give the mat a good scrubbing with a stiff-bristle brush, rinsing thoroughly.
Posted by Christine at 8:28 PM 7 comments: 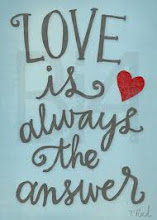 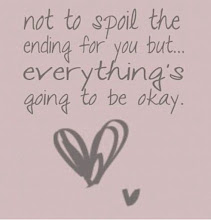